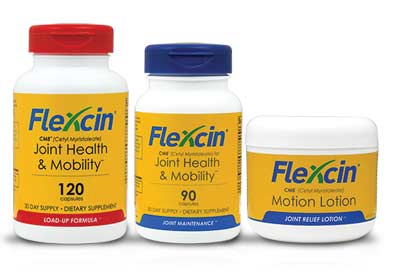 Founded with family in mind, Flexcin provides effective, high-quality joint supplements to help people and pets enjoy an active lifestyle*. We pledge our products only contain the finest natural ingredients, and we will refund the purchase price if customers are not satisfied.

Flexcin was founded by Tamer Elsafy in 1999. It all started with his grandmother who was in a great deal of discomfort, rendering her mostly immobile and confined to her home. Tamer, who had been manufacturing and marketing supplements for years prior, began researching possible joint comfort alternatives.

Tamer found this research and knew that Cetyl Myristoleate might be the key to providing relief. He subsequently worked with doctors and nutritional experts to create an all-natural formula utilizing CM8 as the main ingredient. In 1999, Flexcin was born. Tamer gave it to his grandmother who saw improvements and was able to live an active lifestyle once again.

In the year 2000, Tamer officially founded Flexcin International in order to provide Flexcin to the general public. Since then, Flexcin has sold millions of bottles and helped countless people who have joint discomfort.

Flexcin helped some people so much that they started giving it to their aging pets who were experiencing joint discomfort. At that point, Tamer began looking into a formula specifically designed for pets. Upon creation of a formula and finding that his Pomeranian “Tiny” was having great results and his joint discmfort diminished, Tamer introduced Flexpet publicly in 2005. Subsequently, an additional formula for horses was developed (Flexequine) as well as a new formula designed for the serious athlete (Flexicus).

All products of Flexcin International are made in the USA in FDA-regulated facilities, and only contain high-quality, natural ingredients. All of our products are also guaranteed by the company. If you try one of our products for a full month, and are not happy with the results, you can return the empty containers for a full refund of the purchase price. Flexcin has an A+ Rating with the Better Business Bureau (BBB).

Flexcin is current available online directly from Flexcin International; online sellers such as Amazon, Ebay, and Walmart.com; and from select local retailers (click here to find a local retailer).
Our headquarters are located in Cape Coral Florida, and we can be reached for correspondence at:
Flexcin International, Inc.
909 NE 27th Ln #3
Cape Coral Florida, 33909
1-800-363-7246