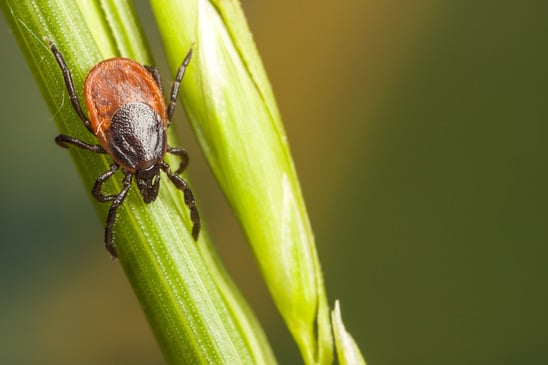 The occurrence of Lyme disease, as with many of the other tick-borne diseases, has increased dramatically over the past 10 years. Lyme disease, or borreliosis, is caused by the bacterium Borrelia burgdorferi that travels in the stomach of ticks. It is transmitted to humans through the bite of an infected black-legged deer tick. Lyme disease gets its name from the Connecticut town in which it was discovered, and it is the most common tick-borne infectious disease in the United States.

Deer ticks vary in size, depending on their stage of life. They can range from larvae that are the size of a grain of sand, nymphs the size of a sesame seed, and adults the size of an apple seed. Contracting Lyme disease usually occurs from the nymph stage ticks that latch on to a victim to feed. The chances you may get Lyme disease from a tick bite depend on the type of tick, and how long it was attached to you. According to the Center for Disease Control or CDC, black-legged deer ticks must be attached to you for at least 24-48 hours to transmit the disease. If you remove the insect sooner you are not as likely to get the disease.

Where Is Lyme Disease Found?

While cases of Lyme disease have traditionally been more common in the Northeast US, they have now been found in all 50 states, Canada and Europe. According to a study by Quest Diagnostics, while the Northeast still reports the highest number of cases, California and Florida had the highest percentage increase in positive test results from 2015 to present. Furthermore, Lyme disease cases increased by more than 80% since 2004.

Lyme disease can be hard to diagnose because its symptoms are similar to those of many other illnesses like the common flu. If you or your doctor think you have the disease your doctor may do an antibody blood test to see if the bacterium is in your blood. Usually, for early detection of Lyme disease, an oral antibiotic regimen is prescribed such as amoxicillin or doxycycline. When caught early enough these drugs cure the majority of cases. In more advanced cases, Lyme disease can sometimes be treated successfully with 3 to 4 weeks of antibiotics.

Symptoms of the disease can occur anywhere from 3 days to a month after the bite and are far-reaching, depending on the stage of the infection. In some cases, symptoms appear months after the bite. In most occurrences, a rash (often bullseye shaped) is one of the first symptoms. However other early signs and symptoms include headache, fever, chills or fatigue. If left untreated symptoms that progress may include a stiff neck and/or severe headache, rashes on other parts of the body, joint pain/inflammation, heart palpitations, numbness in the extremities, and even inflammation of the brain or spinal cord.

Is There a Vaccine?

Valneva, a European biotech company that focuses on developing vaccines for infectious diseases, hopes to bring change. For several years the company has been working on a vaccine against Lyme disease, which is currently in phase II clinical trials in the US.

The CDC estimates that currently, some 300,000 people contract Lyme disease each year. Because of the sharp increase of the disease, in the Spring of 2019, the National Institutes of Health (NIH) announced it intends to commit $6 million in 2020 to various projects aimed at the prevention of tick-borne diseases, including further vaccine research.

How Do You Avoid Getting the Disease?

To protect yourself and family members from the disease it must be done the old-fashioned way with bug spray preferably containing DEET, long pants and shirt sleeves, shoes and socks, and frequent tick checks after being in wooded areas. Put your clothes and any gear into a hot dryer to kill pests that might have clung to clothing. Ticks can’t fly or jump, but instead, live on the ground or trees and bushes, and grab onto someone when they pass by.

Are There Natural Remedies for Lyme Disease?

Furthermore, roughly 10% of people treated for Lyme infection do not get rid of the disease. They may go on to have painful symptoms: joint pain, inflammation, and fatigue. This is often referred to as post-treatment Lyme disease syndrome. It is controversial because its symptoms are shared with many diseases and there is not a blood test to diagnose it. Arthritic type pain that persists after antibiotic therapy may be reduced by nonsteroidal anti-inflammatory drugs (NSAIDS) that reduce inflammation. However, the long-term use of NSAIDs increases the risk of gastric ulcers and kidney damage.

Fortunately, Flexcin may be able to help bring temporary relief to these uncomfortable symptoms.* People who are looking for a natural remedy for Lyme disease often try to stay clear of prescription medication but need something for their joint pain.  A joint supplement like Flexcin may be very helpful for total joint health.* It has zero side effects, is not habit-forming, and contains all-natural ingredients.

At Flexcin we have researched and put together a high-quality formula based on research for safety and effectiveness in relieving joint discomfort. Flexcin contains CM8 (Cetyl-Myristoleate), Glucosamine Sulfate Potassium, Hydrolyzed Collagen Type II, MSM (Methylsulfonylmethane), Bromelain, and a blend of digestive enzymes.

For nearly 20 years Flexcin provides effective, premium quality, all-natural joint health supplements – we have sold over a million bottles. For more information visit our product catalog today. Furthermore, Flexcin stands behind our products and we offer a 90 day supply of Flexcin, with no financial risk to you. If you’re not satisfied with the results you experience simply return your first order (up to three empty bottles) for a full refund of the purchase price, less shipping and handling.

Flexcin
Flexcin International has been helping people with joint pain since 2000 by making high quality joint supplements based on the ingredient Cetyl Myristoleate (CM8), which holds multiple patents for the treatment of arthritis.You can find more info about Flexcin here, or see our products here.

Latest posts by Flexcin (see all)